POME is excited to announce the return of a Melbourne music institution: the Unpaved Songwriter Sessions. After an eight year hiatus, it's time to start breathing new life into Naarm/Melbourne's rich songwriting scene with artists new, emerging and established. Each week will feature four original artists performing in-the-round for an appreciative listening audience in the comfortable and inspiring setting of POME, Richmond.

Songwriters and music fans will have a new weekly fixture as of Thursday, May 19 with the return of Unpaved Songwriter Sessions. Featuring amixture of four up-and-coming and established songwriters sharing songs in-the-round over two sets to a listening room with table service. This isMelbourne’s answer to the Bluebird Cafe in Nashville, where new songs are brought to life before an appreciative, music-loving audience.

‍
It’s been eight years since the original Unpaved Songwriter Sessions finished up at The Old Bar in Fitzroy. The nights included hundreds of artists, among them Liz Stringer, Marlon Williams, Mojo Juju, Tash Sultana, Michael Waugh,Courtney Barnett and Van Walker. New musical partnerships were made and projects inspired.

After a long period pandemic-induced hardship for live performanceopportunities, Unpaved founder and singer-songwriter Les Thomas feels like it’s time for a rebirth and he can think of no better place to host the reincarnatedsongwriter sessions than POME aka The Palace of Magnificent Experiences in Richmond. POME is an inviting and inspired new artistic space overseen by creative director Bernie Clifford, a genuine lover of music and the arts,making it a sought after venue for artists and punters alike.

“I’m keen to hear from all of the artists, young or old, who’ve been quietly creating new songs to share. The more diverse, the better. Naarm/Melbourne has a well-earned reputation as one of the best music cities in the world, but we have some serious rebuilding to do to get our live music scene back to what it was. Great songs make for a great music scene and I believe that’s what fans want to hear. These nights are aimed at enriching that culture for everyone’s benefit. Good times are guaranteed.”

Applications are now open for those interested in performing Here!

Be sure to become a member to take full advantage of discounted entry and other offers.

You can look forward to announcements for show dates via subscribing Here!

“The Unpaved Sessions was a chance for songwriters to hang out and swap ideas and material. Spaces like this were vital in the earlier development of my songwriting and helped me to build an artistic community which continues to sustain me. Melbourne has such a rich vein of song writers and Unpaved provided a way for us to commune and learn from one another. I have no doubt that its return will help to re-strengthen and reconnect scenes that have been profoundly disrupted by Covid.”
‍- Liz Stringer

“So great to see the Unpaved Songwriter Sessions come back to life. These spaces are so important for songwriters to connect with one another, try out new material, hone our craft and deliver our masterpieces to a beautiful listening audience.”
- Kerryn Fields

“From the outset, the Unpaved sessions were an essential and vibrant part of Melbourne’s music fabric. Featuring artists of extremely high calibre alongside those beginning their journey with the craft, Unpaved provided a space in which songwriting culture was nurtured and thrived. I’m absolutely thrilled to see Unpaved return at a time when this city needs music more than ever before.”
‍- Ruth Hazleton

“The Unpaved sessions at The Old Bar remain legendary. They brought together Melbourne’s community of songwriters and fans in a way that’s rarely seen outside of Austin, Texas - and helped cement Melbourne’s position as one of the world’s great songwriting towns. The prospect of their return is a very exciting one for music lovers as we look to make up for the lost time of the past couple of years”
- Lachlan Bryan

“March 31, 2014, Unpaved Sessions number 64 at The Old Bar in Fitzroy. This was the GRAND FINALE session - two ‘In the Rounds’ with Mojo Juju, Larissa Tandy and yours truly followed by Liz Stringer, Van Walker and Jen Cloher. What a night! But that’s what it was like at any given Unpaved Sessions event. It was all about celebrating the songs and the wonderful,diverse community of songwriters we have in Melbourne. You could argue that it was the start of what we have today and what has continued to grow. To know that the Unpaved Sessions are coming back is the best news I have heard in along time."
- Bill Jackson 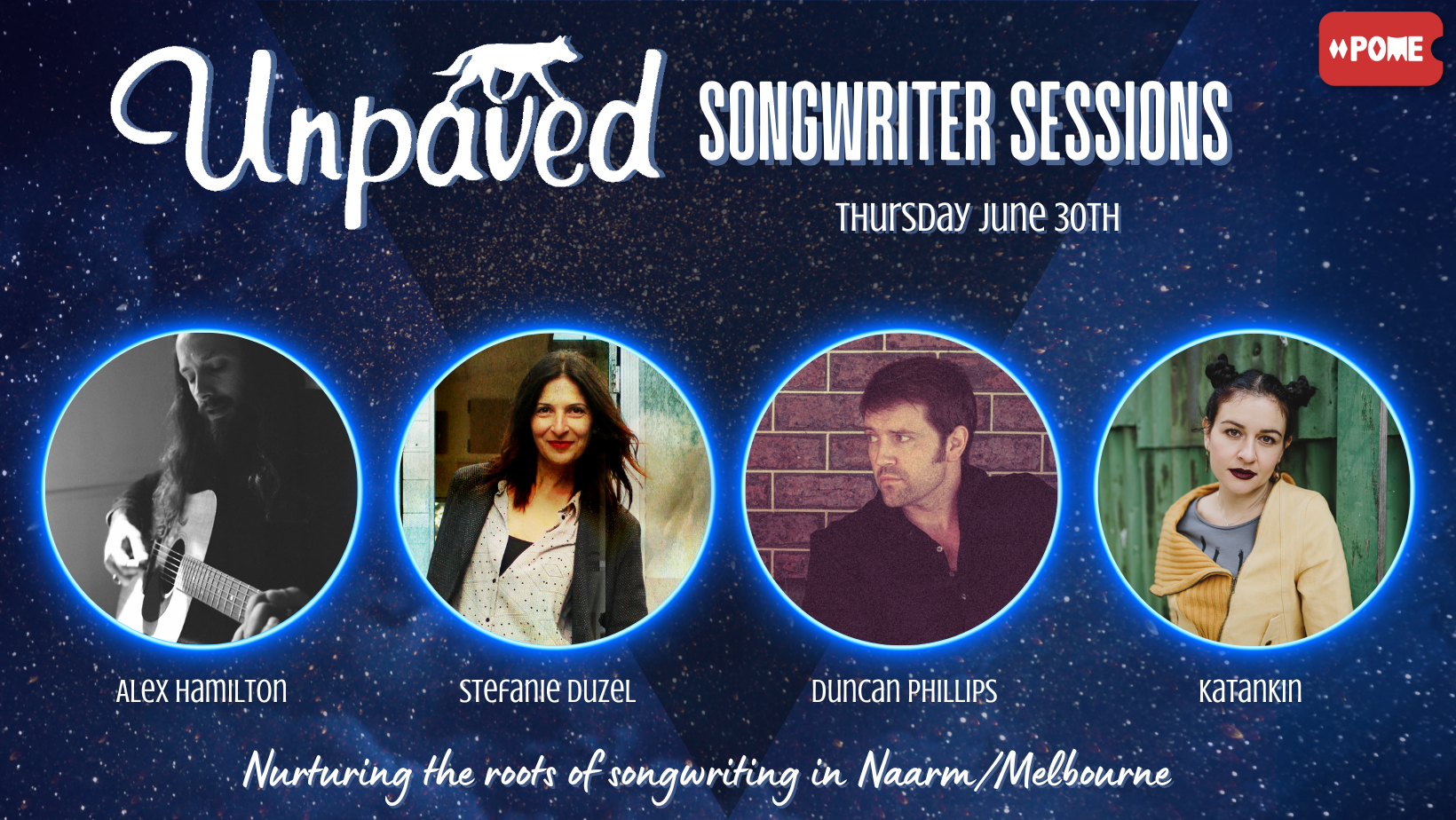